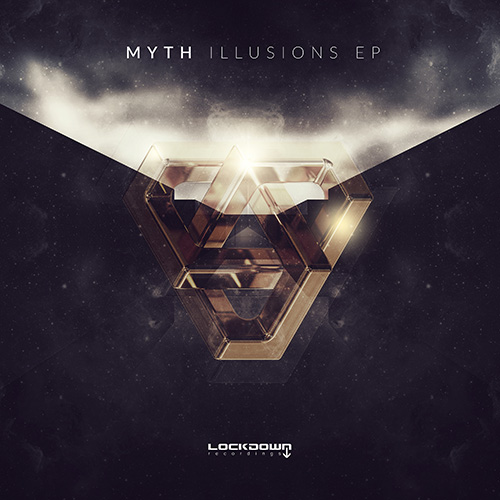 Bristol based Ill Truth already became a name within a city known for its diversity and vibrancy throughout the dance music community. However, now it’s time for one half of Ill truth, Jay Gatehouse, to introduce his new pseudonym to the wider drum & bass circuit. His debut solo release on Lockdown Recordings does exactly that, presenting four tracks which demonstrate his individuality as a producer. Founded in 2013, the UK imprint has ensured that they’ve stayed ahead of the curve, which can be seen through their addition of Jay into their hub. Known through his fresh moniker Myth, the ‘Illusions’ EP has already received support from pivotal names such as Break, Villem and Rene LaVice’s BBC Radio 1 show, which is only set to grow after its November release.

Title-track ‘Illusions’ is reminiscent of the sounds which originally helped elevate Ill Truth into the forefront of club spaces, from Bristol to further afield. Percussive, with slabs of bass which bite underneath the mix, it’s an imaginative roller which builds layer upon layer until it’s understated yet still weighty between each sixteen bars of sound. ‘Dancehall’ is next, pushing the more musical side of Myth’s production spectrum, with a jazzy undercurrent that sizzles through to the surface, showcasing the EP’s versatility. ‘Short Lived’ is the next step, fizzing through with crafted sonics which engineer climatic breakdowns that give a more hectic insight into what Myth has at his disposal. Cracking drums and a buzzing bassline ricochets throughout the record’s core, taking listeners on a ride which once again nods to the more aggressive half of his output. ‘Mackerel’ is the final offering, highlighting the versatile palette which Myth has woven behind the scenes.

The ‘Illusions’ EP is an introduction into an artist who’s paved his way as part of Ill Truth and is now breaking out through his own accord. With the podium of Lockdown Recordings, his profile is set to grow to even greater heights. Staying inherently underground, this endeavour is a step towards global recognition for a producer who’s stayed true to his roots.